Also known as Mary thistle or holy thistle, milk thistle is a commonly found plant related to ragweed and daisy. It is said that the plant got its distinctive coloration—with large white veins and brilliant purple flowers—from the Virgin Mary’s milk, of which a drop fell onto the plant’s leaves.

One version of the legend behind the name goes like this: when Mary, Joseph, and the baby Jesus were fleeing, Mary had to stop to nurse the infant Jesus along the way. Some of her breast milk fell on a rock and there grew a thistle.

Milk thistle is believed to possess numerous medicinal properties thanks to compounds collectively called silymarin found in the plant.

Milk Thistle’s Benefits Based on Science 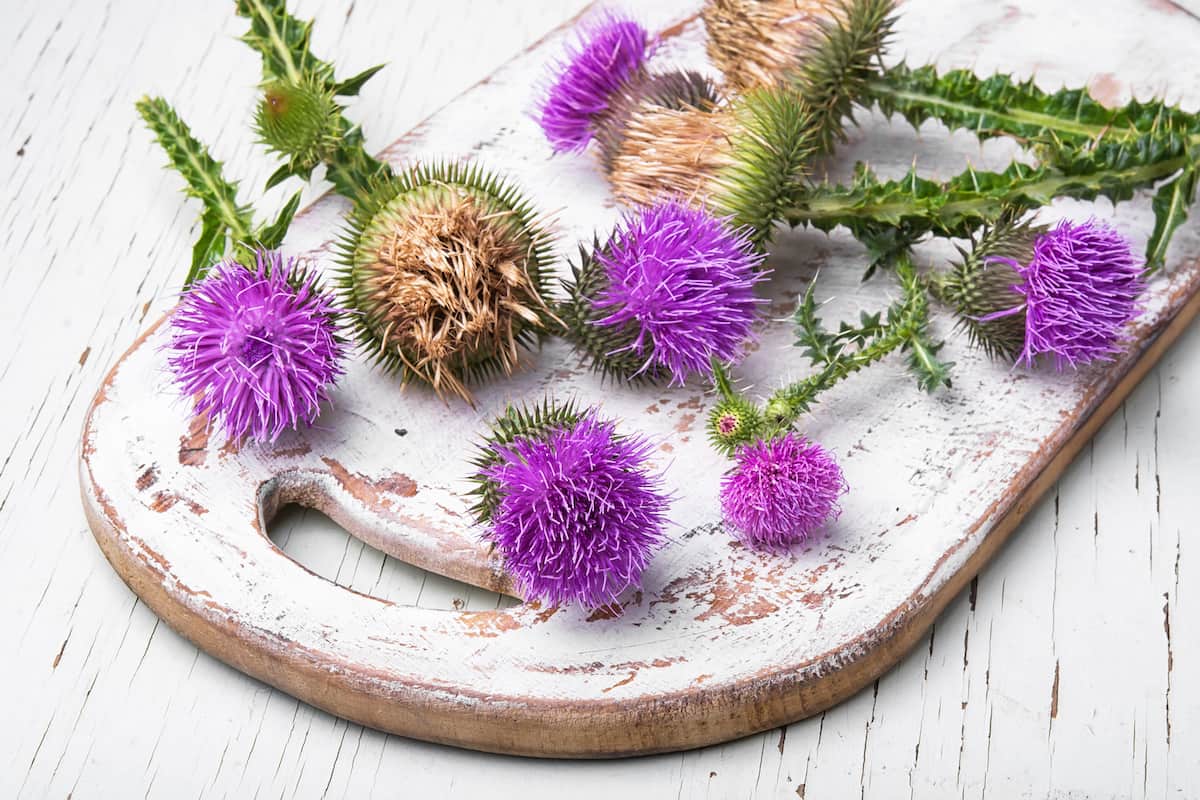 Milk thistle is one of many plants traditionally used for medicine that are now being examined under a scientific light.

It’s been established that the silibinin or silybin derived from milk thistle acts as an antidote against fatal mushroom poisoning. In one case report, two cases of Amanita poisoning from poisonous mushrooms like the Death Cap and Destroying Angels were reported and were subsequently treated with a combination of substances, including milk thistle-derived sibilinin. Both cases reported successful treatment.

Milk thistle’s active substance, silymarin, is a combination of three isomer flavonoligans: silybin, silydianin, and silychristin. This substance, although found in the entire plant, is concentrated in milk thistle’s fruit and seeds.

Silymarin has several functions. It acts as an antioxidant by reducing the production of harmful free radicals and it can block toxins by preventing them from binding with certain membrane receptors. Additionally, it’s found in animals that silymarin can reduce liver injury brought about by factors such as alcohol, radiation, and iron overload.

A double-blind study published in the Journal of Hepatology also showed the potential of milk thistle as a treatment for patients with cirrhosis of the liver.

Specifically, it showed that patient mortality was reduced when patients with cirrhosis were treated with silymarin. In a randomized clinical pilot study, silymarin combined with vitamin E aided in the treatment of patients affected with non-alcoholic fatty liver disease. 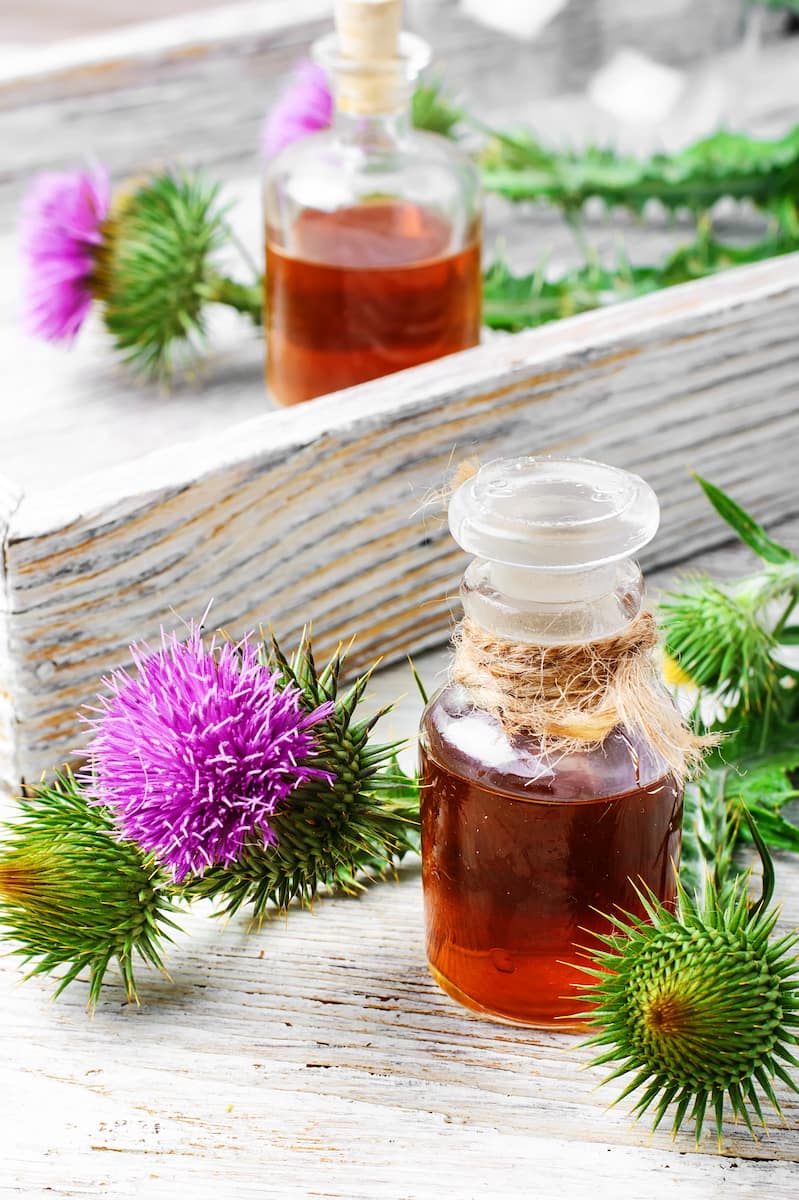 Another super substance found in milk thistle, silibinin shows potential as part of the treatment for advanced metastatic cancers. This is due to its long history of human use, its non-toxicity, and its pre-clinical efficacy based on a study by Deep et.al. 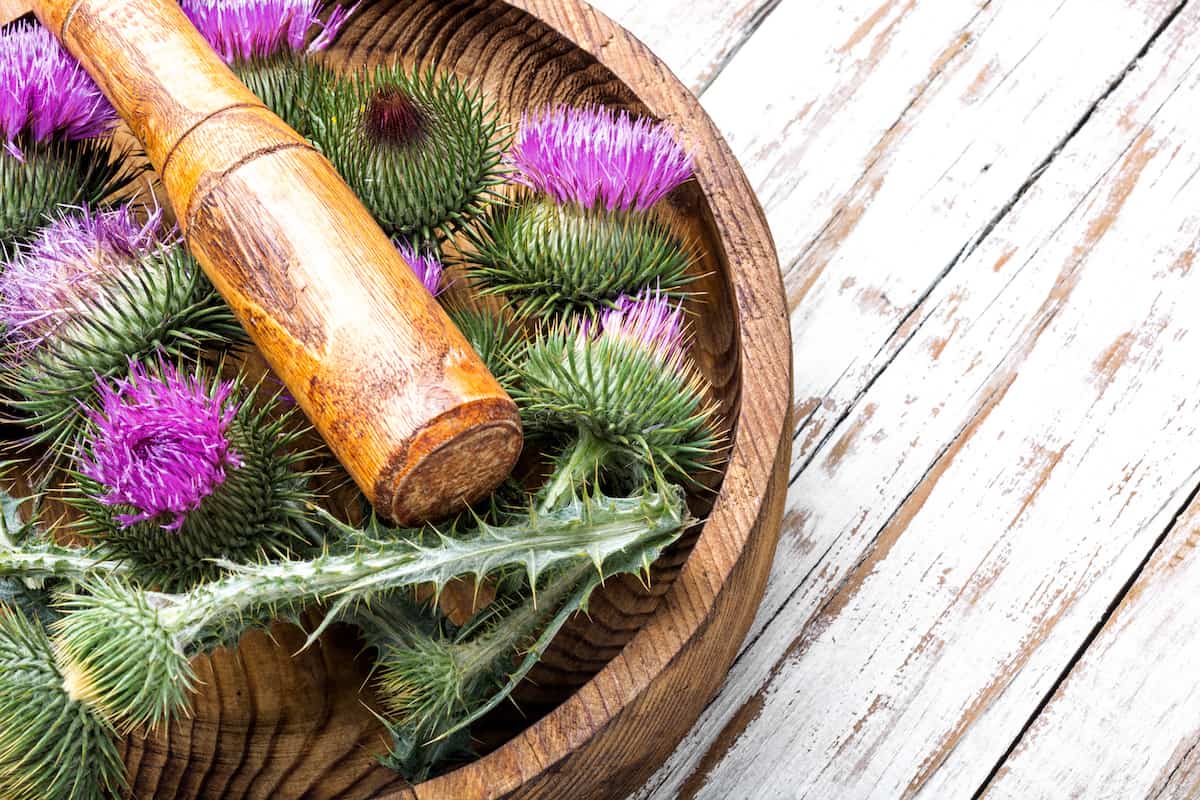 Milk thistle has been traditionally used in Europe to treat liver diseases. In fact, it has been in use for more than 2,000 years. In Germany, the use of milk thistle has been recommended to treat indigestion, toxin-induced liver damage, cirrhosis of the liver, and even inflammation.

Traditionally used to treat disorders of the liver and gallbladder, more research has been done over the years that have helped identify some of milk thistle’s other health benefits.

Let’s look at some of the science-based benefits of milk thistle in this article.0

A study by Di Pierro et.al studied the effect of silymarin as a galactagogue. Results showed that with the oral treatment of silymarin (420 mg/day), the subjects’ daily milk production increased by 85.94%. The results also suggested the safety and tolerability of silymarin, citing that the compound did not affect the subjects’ milk quality.

2. May Help with Liver Detoxification

Milk thistle has been used for a long time to treat liver problems. A clinical study showed the effects of silymarin on lab mice that were fed a high-fat diet to induce obesity. Results showed that silymarin reduced fat mass and inflammation in the mice. This shows its potential to address liver damage and even insulin resistance.

Silibinin may possess anti-cancer properties. In a comprehensive review by Polachi et.al, silibinin demonstrated promising effects when it comes to fighting liver disorders and even cancer. Also, silymarin may help improve existing cancer treatment by reducing its side effects.

Aside from that, silymarin can help chemotherapy work more effectively. Do note that clinical studies in humans have been limited, therefore silymarin’s cancer-fighting properties and effects on humans need to be further studied.

4. It May Help Prevent Diabetes

Diabetes, when not prevented or treated, can become a debilitating disease. According to the Center for Disease Control and Prevention, there are more than 30 million people in the United States alone who are affected by diabetes. Type 2 diabetes is the most common, affecting 90-95% of those who have diabetes. It is also one of the leading causes of death in the US.

Milk thistle may be able to complement existing treatment for type 2 diabetes. A review by Kazazis et.al discusses the potential of milk thistle in diabetes management, as they have found a substance that may help lower blood glucose levels in those who have type 2 diabetes.

Additionally, milk thistle’s antioxidant and anti-inflammatory properties may also reduce the risk of diabetes-related complications such as kidney disease.

5. Milk Thistle May Fight the Effects of Aging 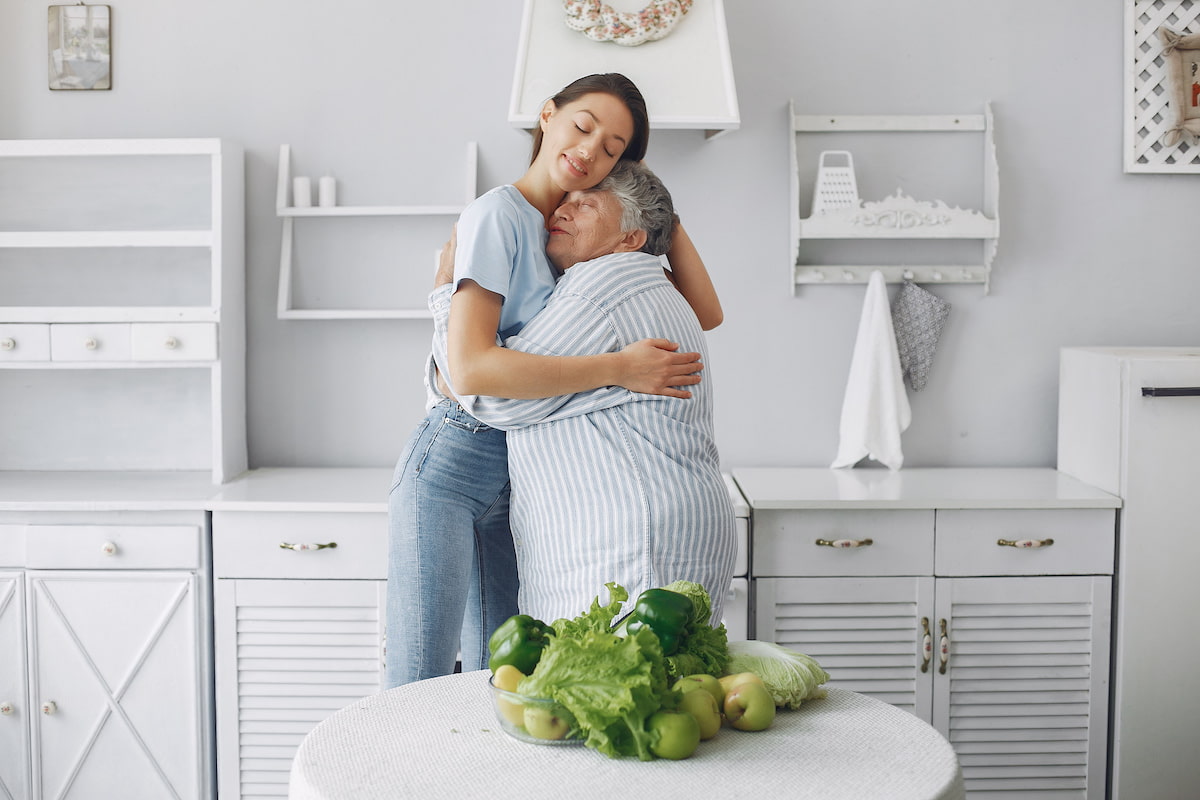 We can’t avoid aging, but we may be able to slow down the process with the help of milk thistle through its antioxidants. In one clinical study published in the Photochemistry and Photobiology journal, silymarin reduced inflammation and inhibited oxidative stress caused by UV rays in mice dermal cells.

Additionally, silymarin has been shown to fight off glutathione depletion which can be brought about by poor diet, age, and constant stress. Glutathione is one of the body’s most important antioxidants, fighting off free radicals to reduce oxidative stress.

Aside from combating the effects of aging, milk thistle may help prevent age-related neurological decline in the form of Alzheimer’s or Parkinson’s disease. Milk thistle’s anti-inflammatory and antioxidant properties show potential in protecting the neurological system, which in turn can fend off decline in brain function that comes with age. 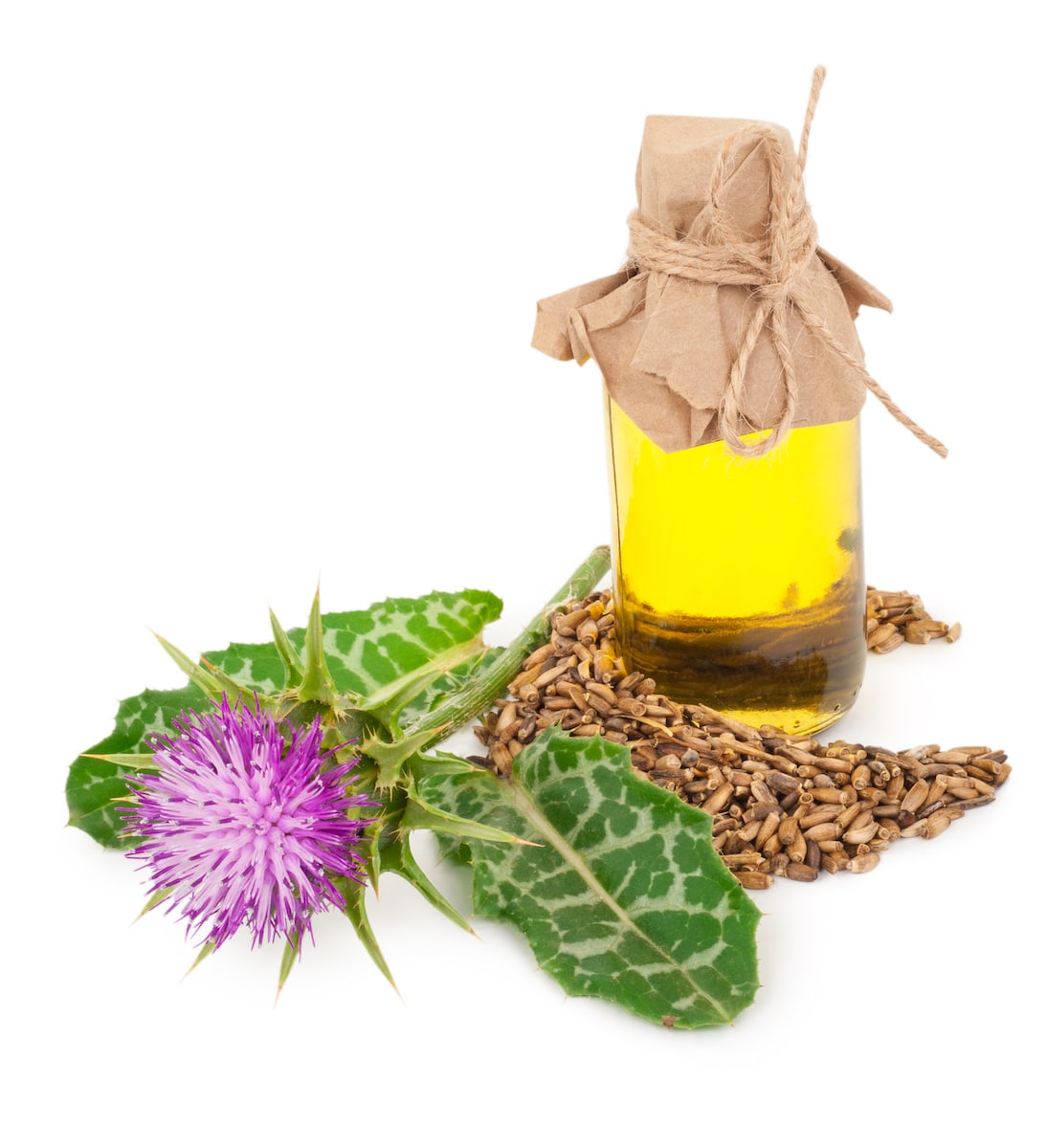 Milk thistle can be taken orally in the form of supplements, such as tablets or capsules. It can also be consumed as tea but remember to limit your tea intake to 6 cups a day. As milk thistle can interact with other medications, ask your healthcare provider first if you’re thinking of adding milk thistle to your diet.

This wonder plant has a broad range of potential health benefits, due primarily to the plant compound silymarin. With its long history as a medicinal herb, milk thistle has been shown to be generally safe for use when taken in appropriate doses to treat different medical conditions.

However, as with natural health food products, more research needs to be done for us to confirm the medical benefits of milk thistle. While milk thistle products are easily accessible in health food stores and online retailers, it’s always best to consult your healthcare provider first prior to using these products as a dietary supplement.